I bought myself a 3D printer

Finally, I succeeded convincing myself that this was a good idea. It was time for another hobby. In my daily job I only work in a digital/virtual world. And although I love ICT in the end it is not possible to “touch” the result; it’s all bits and bytes on computers and best-case you will see a result on your smartphone, tablet or computer screen. I needed to get physical again.

Back in the days, I had a nice hobby: building and flying remote controlled aircraft. I loved both the building of the models and flying them; I did not like repairing them. But let me tell you, I did more repair work than actual building. What I liked was the fact that something that I glued together, was flying and could be controlled remotely with a small box and 2 sticks. It was magic for that 14-year-old boy.

Then I learned how to design electronics and computers and that resulted in a few projects. Amongst them was a self-build plotter that was controlled by a single board computer that I designed and build myself as well. It was really satisfying to see a piece of paper and a carriage with pens moving back and forth to draw a picture. Nowadays, you can buy all the components for hardly any money, but in the 1990’s that was not an option. Loved it!

Over time I stopped designing and building physical stuff. Work and personal life took me into other directions. With the introduction of small computers, microcontrollers and all sorts of websites that deliver almost any physical thing you can imagine, the itch to build things came back.

At some point I discovered 3D-printing, but I had mixed feelings. We are dumping so much plastic in our environment and here is a printer that uses plastic to print. It took me a lot of time to balance the pros and cons. Eventually I decided that although I would print in plastic and generate plastic waste in the process, it would not really add a lot to the amount of rubbish we already throw away. So here’s my new toy:

There was another topic involved: it is great to download 3D-print files and print them, but at some point, that would get old. So, the next challenge: how to create my own 3D-designs? I designed my own printed circuit boards for my earlier projects and drawing stuff on a piece of paper is not an issue at all. Now there is this other, third, dimension. That’s new to me.

I looked at several applications and decided to give OpenSCAD a go. And then you need to define what to design of course. Well, that was easy: we have a small ladder that is used a lot. Over time, the feet broke and got fixed by wrapping them with tape. Time to do it right; let’s design new feet. Since I am new to this, starting from scratch would probably result in nothing. I found some nice designs on Thingiverse that I could use to get started. Here’s the result: 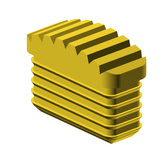 I have uploaded the design of the ladder foot to GitHub.

All the basic stuff is now in place. I bought a few webcams that I will setup to monitor the printer while it is working. Next to that, I am planning to buy a cabinet to store the printer in. More on that in the next post.