Since I am done with the paperwork and check outs, I joined Lex and Egon on a sightseeing tour. After leaving Kissimmee, we flew to the coast; then along the Kennedy Space Center where they used to launch the space shuttle; then back to Kissimmee overflying the Disney parks. 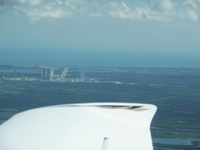 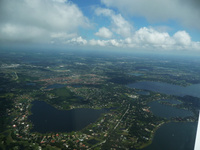 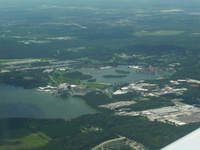 It was quite a bumpy ride; the temperature at the ground is over 32 degrees. The weather forecast shows thunderstorms later today. Once we returned to Kissimmee, we found that for most of the pilots the paperwork was done and everyone was getting ready to fly to Vero Beach for lunch. So, I hopped on the Cirrus of Lex again for a flight to Vero Beach. 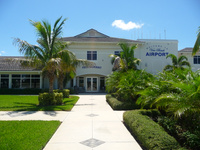 Once there, we found out that the restaurant was closed to Labor Day which is public holiday over here. Looks like some people can still afford the chauffeur driving them to their private jet and have him load the bags onto it. 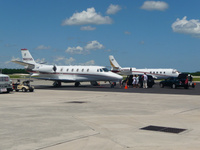 By now it was after 14.00 and everyone was getting a bit hungry. We got on the planes again to hop over to Merritt Island. 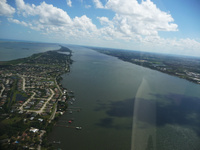 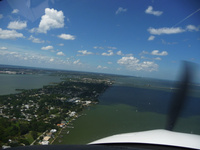 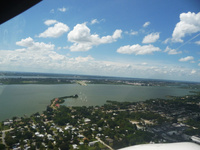 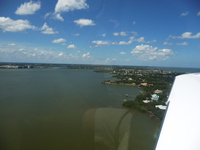 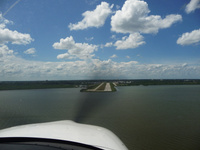 A taxi took us to a restaurant about 15 minutes away from the airport. While driving back from the restaurant, we noticed that the sky was getting dark and by the time we got to the airport, we were surrounded by rain, lightning and a lot of wind; no flying conditions. We waited for some time to allow the bad weather to move on, not only at Merritt Island, but also at Kissimmee since we had to fly back there. After all the rain, we had a nice smooth ride back.

Another day in paradise. Tomorrow we will start the flying tour up north. Have a look at the pictures of today: Flying from Kissimmee (KISM) to Vero Beach (KVRB) and Merritt Island (KCOI) back to Kissimmee (KISM).