Fraser Island: they have a lot of sand here...

Fraser Island is the largest sand island in the world. It’s about 125 kilometers long and about 22 kilometers at its widest point. On the island you will find loads of fresh water lakes, a rainforest and more. It’s all about the nature and then of course the tourists. Like us… So today we are going on a whole day tour, showing us all the nice things this island has to offer.

It is 1 April today and our driver has a good sense of humor. So he starts by explaining the safety regulations and that in case of issues with the bus he may need some help. Therefore, he creates two groups: the women will push the bus and the man will take pictures. That got us going. It will take over an hour to cross the island.

On our way over, we stop at a moving dune. This dune slowly moves land inwards and we stroll down to it to take some pictures. 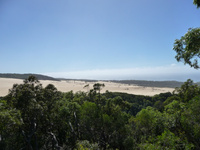 When everybody is back on the bus, it doesn’t start anymore… The driver announces that this isn’t a yoke… And that everybody should leave the bus; the women to push and the men to take pictures. Well, he wasn’t yoking, the bus didn’t want to start anymore. Then our hero, Reg, helped out by smashing a big pipe at the right spots and they got the beast to live again.

On we go and there it is: the beach on the other side of the island. We will now drive along the beach for about an hour to get to some interesting places. Well at least that was the plan. But there is some weather building up in this part of the country and the wind has created high waves. Although it’s another 2 hours before high tide, we can’t get on anymore because the beach is getting to small to drive on. 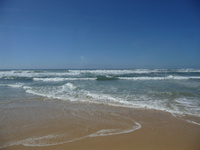 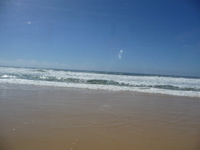 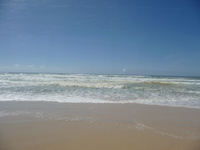 Turned around and drove back to a nice spot for some teas and coffees. And to take pictures of course. The black stuff is not oil that spilled on to the beach. It’s sand! But with hundreds of years of vegetation in it. You can find this stuff all over the island. 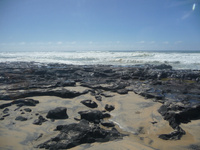 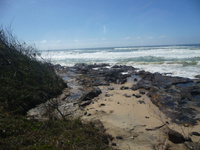 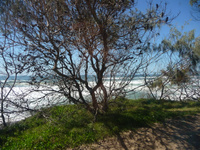 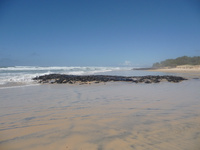 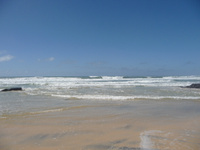 Along the beach you will also find quit some streams of water coming from the island. Like this one:

During our stop here, we go for a stroll to the same sand dune we saw before. 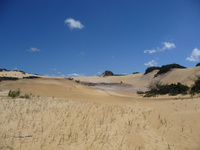 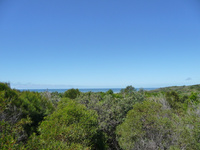 Then it’s time to get on the bus again. After lunch we move back inland to a part of the rainforest where we go for a nice walk. The driver explains all about the trees, the water etc. I can’t remember a thing he told, but it is beautiful here… 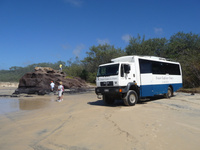 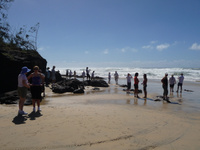 After that exercise it was time for another highlight of the island: Lake McKenzie. This is considered to be the prettiest lake on the island. So we had to go for a swim. 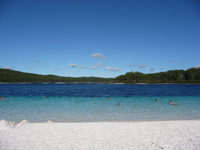 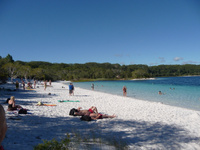 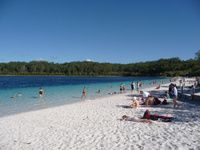 Then back to the resort and the tour was over. We spent almost the whole day on this tour and I found it quite interesting. Now it’s time for a beer, dinner and a good night sleep again.