Doing the tourist thing in Longreach

Although Longreach is not the biggest town in this country, it has some interesting things to offer. Today we will explore most of them. We started the day with a visit to a station (or farm). We got picked up at the hotel by Trevor in a more or less oversized “bus” aka “truck”. From there on we drove to the station where we picked up Marie. Marie and Devan Pearce run Strathmore station and she was going to tell us all about this place. 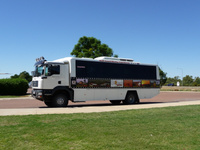 And so she did. These stations are big. You start at say 50.000 hectare, with about 10.000 sheep and about 1.000 cattle. Marie told us all about the different types of grass and the trees that are on their land. It became clear that she loves this place, since there was so much passion in the way she talked about it. 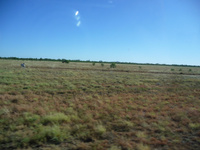 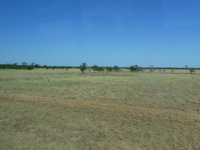 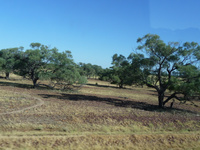 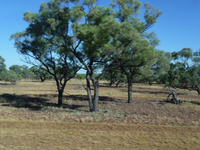 Living here means that you have to take care of water. Either by keeping it away from your house (as said before: when it rains, it RAINS. And since the “rivers” have no boundaries, they become very wide and can cause flooding) or by making sure that there is enough. We started by looking at a windmill. This one is used to pump water from the Thomson River up to about 20 Kilometers inland. It feeds several dams and drinking stations and there are more mills like this to push the water onwards. These things are big (well over 45 meters) and expensive, but luckily Maries father bought a few a long time ago, so they have spare parts (look at the picture and you will see one that was blown over by a storm some time ago). 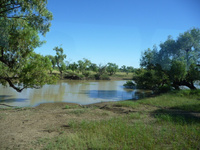 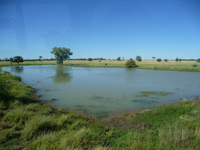 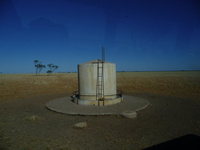 After driving around on their property, we ended up at their home where we were invited for a cup of coffee. Here we also met her husband Devan who proudly showed us the cattle ready to be marked and the bulls ready to be castrated… 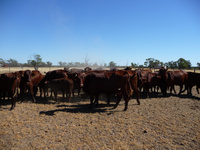 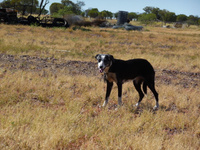 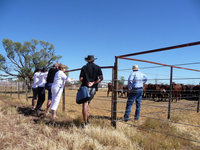 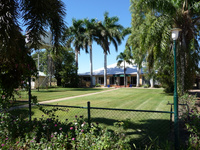 Although they are so busy to run their business, the house and the garden are really clean and maintained. These people must be working 24 hours per day all days…

After playing with their dogs and Janice sort of shocking both Marie and Devan by telling that she dresses up her little doggies (Marie’s response: we have nothing unusable at the station…), it was time to move on.

Next stop: the Qantas museum. Well it’s just that: it explains the history of Qantas. Furthermore, they have parked two biggies here that you can visit. We did one: the 747-200. 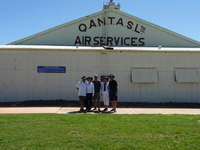 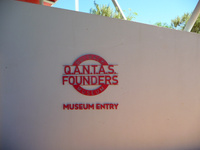 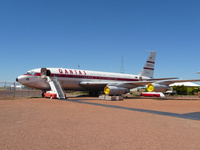 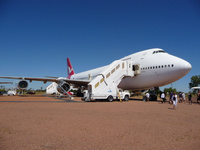 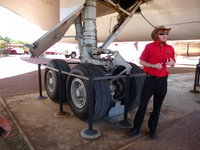 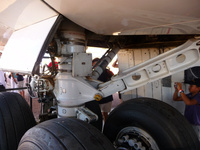 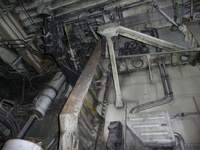 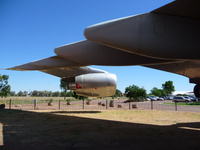 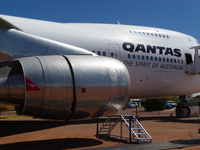 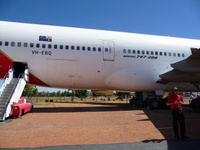 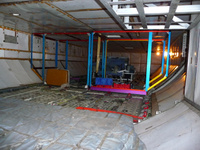 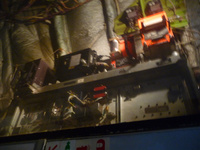 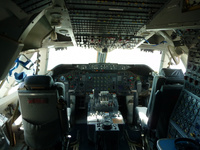 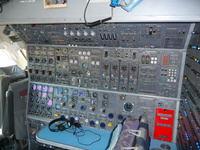 Well, been there, done that, next… We moved on to the Australian Stockman’s Hall of Fame; a living memorial to the pioneers who braved this vast untamed land”. A nice museum that tells the story of, well as stated before: the pioneers. It’s more an Australian thing; we foreigners will think it’s a nice museum, but the locals consider it to be more than that.

Again an interesting day down under. I must say that the tour to the station was very impressive. Probably because of the way Marie told her story and the fact that we were invited in their home to have coffees.

Time to go to bed now. Tomorrow we have our longest flying day of the whole air safari; we will push on to Hervey Bay, all the way east on the coast. Look at our little planie under the nose of the big fellow… 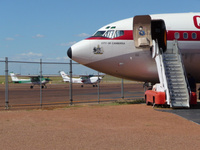