Thursday 19 March: our first flying day in Australia. Today we fly from Toowoomba to Charleville. This trip is relatively short, but contains one challenging hurdle: we need to cross the controlled airspace of the military base in Oakey. Once we have passed this airspace, we will not encounter any controlled airspace for almost a week.

We started our day with a nice big Australian breakfast (I thought the American breakfasts were big, but the Australians are at least of that size) and then travelled to the Darling Downs Aero Club. Here, Ray was already busy preparing the aircraft and the flight plans. 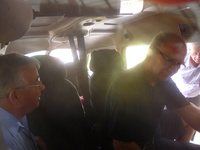 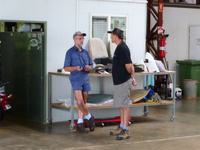 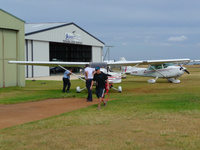 For me this is actually the first day I will fly in Australia. As posted before: Ray focused on the other pilots first, since they have to do the tour on their own and therefore need to be fully prepared. Ray and I will fly together in a Cessna 182 with retractable gear and constant speed propeller. So, at least two new things for me.

Ray will handle the radio for the next few days, allowing me to focus on flying the aircraft and what’s even more important: take pictures and enjoy what’s out there. Once everybody had their luggage on board and checked their aircraft, it was time for the briefing. Ray went over the track and explained once more how to handle the radio and get through the controlled airspace of Oakey. 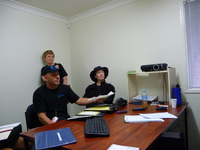 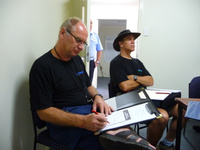 Then after all the checks we were ready to go. Well, almost. We first had to take a lot of pictures. Like these: 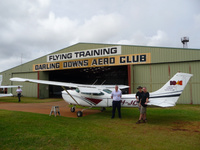 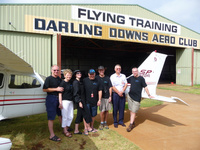 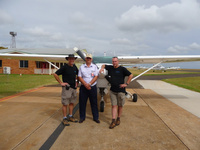 Then it was time to go. Since our 182 is the fastest plane, we started last. The plane has more or less the same instruments as the PH-COU, the Cessna 172 M that I have flown for quite a few hours. But the propeller and retractable gear are totally new to me and therefore Ray has to assist and monitor me for the whole trip. He also has to make sure that the other 2 planes go in the right direction. He will be a busy man today. Once airborne, we have a great first flight to Charleville. To give an impression: 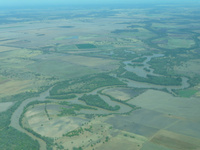 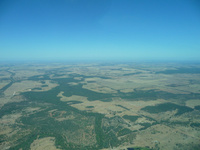 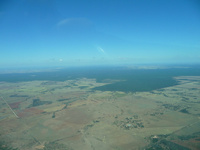 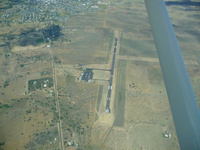 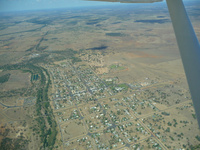 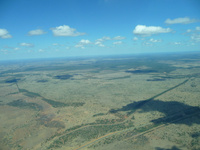 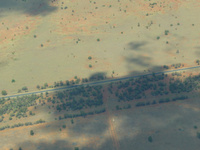 After about an hour of flying Reg and Harold were also getting more comfortable and we had our first laughter when Harold came on the radio and said “I have been flying IFR for such a long time”. Reg was confused “Flying IFR”? “Yes” Harold replied “I follow Reg”…

On our way to Charleville, we overtook both other planes and therefore landed before they did. Harold and Marjie overflying us and Reg and Janice arrive last (they have the slowest aircraft). 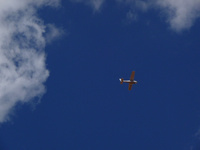 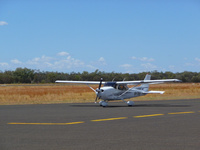 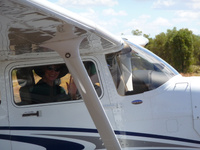 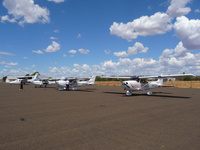 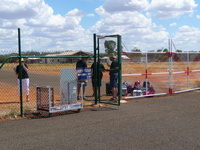 There’s not a lot to see at this airport. But one thing is immediately very different from Brisbane and Toowoomba: we are in the Outback and there are lots and lots of flies…. And it’s hot here with temperatures high thirties.

Once all planes were on the ground we went to the motel and after a fresh up we got on to the next event of the day: a tour through Charleville. So what’s there to say about the town: there are about 3.500 people living here. It has been flooded quite some time ago. And there was something about a guy with a great idea about making rain. 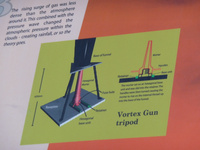 That’s all I have remembered and that the nice lady (here she is with Ray on the left and Clare on the right) that drove us through town was very enthusiastic about this nice small town…  If you want more about this place: start here. 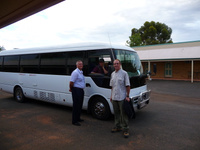 And check out the local chicks…. 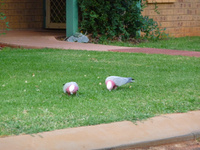 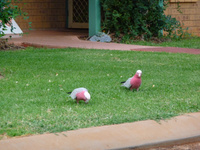 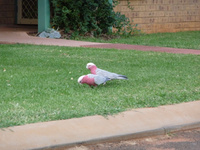 Anyone know what their names are?

In the evening we had a lovely dinner at the Hotel Corones. But before that, Jackie Tanzer, one of the owners of the hotel, explained a bit more about the hotel and its history. I have some pictures of this, but have not been able to upload them yet. And don’t ask me what the history was: it was a very pleasant story about a guy from Italy or Greece that moved to Australia without any money and unable to speak English that eventually made a lot of money and build this nice hotel. If you want to know more, go to the website or even better: visit the hotel ;-)

And then we finished the day with some stargazing at the Charleville Cosmos Centre.

How was the first flying day? Fantastic! We had great weather (it was 30+ in Charleville), the initial track was not too long and the route was along roads, therefore the navigation was not an issue today (well, it would probably never been an issue, since all planes have a GPS). Ray is a very relaxed guy and Clare had everything nicely organized.

Here you can find all the pictures of today: 2009 Australia AirSafari Day 2

And this is the track of today: